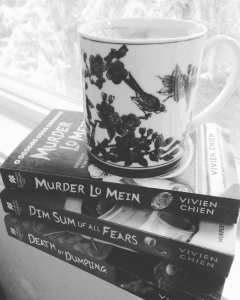 For a while now, I’ve been meaning to try Vivien Chien’s Noodle Shop Mystery series. In the first book, Death by Dumpling, readers meet protagonist Lana Lee who ends up working in her parents’ restaurant “Ho-Lee Noddle House” after impetuously quitting her office job. The restaurant is part of a small Asian shopping center, run by Mr. Feng. At the start of the story, Lana delivers a take-out order to Mr. Feng, who is discovered dead a short while later. Tragically, he had a deadly allergy to shellfish and was killed by a shrimp dumpling. Predictably, the police turn their investigative attention to the head chef of the noodle house. However, Lana is certain no one at the restaurant would serve shellfish to Mr. Feng accidentally or intentionally. So she dabbles in a little amateur sleuthing. Who in the village had the motive for murder?

So far there are three books in this cozy mystery series, with the fourth due for publication in August this year. Each installment features a new murder victim, with a different murderer, set in the same little Asian shopping center. This is perhaps my favorite aspect of a good cozy mystery series – the unlikely death toll in quaint locations. Likewise, Lana’s character makes a delightful, and equally unlikely, sleuth – somehow landing herself in the center of every case. With no investigative experience, she always manages to remain one step ahead of the professional detectives. Speaking of the detectives, Lana of course becomes romantically involved with the lead detective, Adam Trudeau. So begins the usual tension of whether their budding relationship can survive the dangers of Lana’s stubborn involvement in police matters. Yes, these books possess all the ingredients for a quintessential cozy mystery series, with the added bonus of an almost entirely Asian cast of characters.

The books are somewhat predictable. It’s not especially difficult to guess the murderer in any of the stories, but there are enough suspicious characters to keep you second-guessing. None of the characters are particularly complex, which increases the predictability factor, but they are likeable. Lana’s family, patrons to the restaurant, and the neighboring shop owners around the noodle house, form a community of engaging characters.

The only part of this series that isn’t connecting with me is the romance between Lana and Adam. It’s rather stilted and unexciting. By book three, Adam’s backstory is revealed as explanation for the snail’s pace romance with Lana. However, the context does very little to ignite any palpable chemistry between the two characters. The romance is the weakest aspect of these books, but is easy to forgive. After all, readers don’t typically turn to the cozy mystery genre for heated romance.

Overall, these books are sheer fun, despite all those unfortunate murders. They are quick, entertaining reads, lacking depth and heaviness in the best possible way. Rather than keep you up at night, this is the type of murder story you can read before bed and still get a good night’s sleep. Best of all, the almost entirely Asian cast of characters, and Asian culinary inspired word play in the titles, make for a welcome addition to the cozy mystery genre.