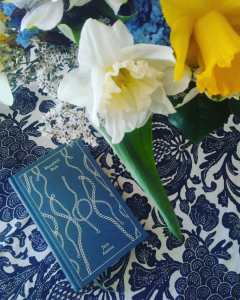 Any Jane Austen fans visiting my little blog? I love Austen, and have read most of her books repeatedly. However, I’m least familiar with Mansfield Park. So when I noticed that one of my favorite Instagrammers (Tes of @paperbackbones) partnered with another Instagrammer to start an Austen book club (#ardentlyaustenbookclub), and Mansfield Park was the selection for the month of March, I decided to join the reading party.

Mansfield Park is the story of Fanny Price, who at the age of 10 is plucked from her childhood home (her mother having married beneath her station, consequently raising children under impoverished circumstances) and brought to the lavish estate of her aunt and uncle. The rest of the novel follows Fanny as she comes of age, and secretly falls in love with her cousin Edmund. For much of the novel, Edmund is entirely unaware of Fanny’s affections, and is himself infatuated with Mary Crawford, the visiting relative of one of their neighbors. Things go awry when Mary’s brother, Henry Crawford, fancies himself in love with Fanny. He proposes, she refuses, whereupon her Uncle sends Fanny back to her parents and siblings, believing a reminder of her impoverished circumstances will settle her on the idea of matrimony. Fanny is misunderstood and mistreated throughout much of the novel, but remains faithful to her principles and loyal to Edmund.

I’m not sure what to say about this novel. It is notably different from Austen’s earlier works. For one thing, it is not as funny as any of the other Austen novels I’ve read. Though, there are glimpses of the humor I consider quintessentially Austen, particularly in regards to Fanny’s two aunts, each strongly written and amusing characters. Fanny’s character is far more serious and correct than any of Austen’s other heroines. As such, I found it slightly difficult to connect with Fanny. What I found most confounding about this story, was the ending. All the plot lines are wrapped up, but in a surprisingly succinct way. For example, there’s no grand gesture, or sweeping romantic conclusion to the story line between Fanny and Edmund. The book ends without fanfare or embellishment. It is a no-nonsense ending befitting of Fanny’s seriousness, but not terribly heartwarming.

The introduction in my clothbound Penguin Classic edition of Mansfield Park points out that this book “…is Austen’s most complex and profound and her least likeable novel”. I think that adeptly summarizes my feelings about it. It was interesting, but not terribly satisfying. I’m not likely to come back to it over and over again, as I do with all her other works.

Interestingly, I also watched the 1999 movie adaption of Mansfield Park, starring a young and dashing Johnny Lee Miller as Edmund (fun fact – he also starred in the BBC mini series adaptation, but as a different character). The movie adaption is vastly different from the book. Most notably, Fanny’s character in the movie is outspoken, free-spirited, and almost entirely unlike the character as Austen wrote her. It is easy to see why the movie adaption chose to take such liberties with the story. Frankly, the movie version is more likeable. Although, watching the movie immediately after reading the book, somewhat thwarted my enjoyment of it. I was too aware of all the deviations from the novel version. All the same, Johnny Lee Miller is incredibly dreamy in the movie. I was 100% on board with the movie depiction of Edmund. In any case, if you haven’t read the book, I suggest starting with the movie before picking up the novel.