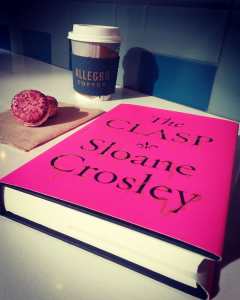 A handful of old college friends reunite for a wedding held at the groom’s family estate. During the reception, one of the friends (Victor) wanders to the master bedroom of the groom’s mother, and passes out on her bed. When she wakes him up, she shows him a locked compartment in her dresser where she keeps her jewelry and a sketch of an 114 carat necklace found in Nazi occupied France. Victor secretly steals the sketch, and tries to track down the necklace lost during the war. Meanwhile, two of his friends (Kezia and Nathaniel) begin to worry about Victor, who is acting oddly. The three of them end up in France, chasing down a necklace that may exist only fictionally.

Anyone else watching the Netlix show Friends from College? This book reminded me a lot of that show. Granted, this novel and the Netflix show are different stories. However, they both center around a group of friends who met in college, who years later are still trying to make sense of their messy lives. In both cases the characters are self-absorbed, self-pitying, and immature. Additionally, both stories attempt to balance the childishness of the characters with an overarching air of dry comedy. They are unceasingly droll. One pulls it off better than the other. The Netflix show boasts a stellar cast (Keegan Michael Key, Fred Savage, Jae Suh Park, Billy Eichner, Nat Faxon, just to name a few of my favorites) that give life to an otherwise tired narrative. I may have enjoyed The Clasp more if it were a TV show with an all-star comedic cast.

In print, this novel just didn’t do it for me. I was annoyed by the characters. They were one-dimensional. Nathaniel is a womanizer whose heart is literally too small; he has a physical and emotional heart condition. With a misplaced sense of superiority, Victor disdainfully scoffs at everyone and everything, but himself never contributes anything of value to the world. Kezia has a more-than-plutonic, less-than-romantic, relationship with both Victor and Nathaniel. She’s in a job she doesn’t really like, chasing boys she doesn’t seem to like. She’s not very interesting. None of them are especially interesting.

I’ve grown tired of stories about full-grown adults dissatisfied with their perfectly decent lives. There is no real plight in these stories. The characters are steeped in discontent, apathetically capitulating to personal growth, if they grow at all. There are so many more interesting stories in the world, about characters who give a damn.

It’s not all bad. There is an observational wit throughout that I appreciated. For example, when one of the characters lands in Florida to attend the wedding, Crosley writes:

“He was dubious of his environs. Florida – rather, the stretch of it he had witnessed from the airport: causeways and condominiums, Sunrise Liquor and Sunset Dental, bank branches surrounded by menacing palmetto plants – was trying to trick him into thinking it was a real place”.

I’ve been to Florida in all its surreal glory. If you ask me, that’s a pretty spot-on description. Much later in the story, the character, Nathaniel, observes the differences between L.A. and Paris:

“If Los Angeles, with its youthful obsessions, made life feel like death, then Paris made death feel like life”.

These little witticisms kept me reading. I wanted to like the book, as much as I suspect I might like the author. Crosley is adept at describing places with punchline-y pith.

The book also picked up a bit towards the end. When the characters end up in France, a little more action kicks in, and propels the story forward. Arguably, the characters undergo a modicum of personal growth before the book concludes. I still found them tedious, but less so than in the beginning.

Reviews are a curious business. They are subjective; hopefully (but not necessarily) educated opinions. I try to remain somewhat objective when writing reviews – providing supporting arguments, based on the text in question, to back up my assessment of a book. I want every book to get a fighting chance at finding its audience. While reading this book, and especially while writing this review, I wondered – did I read impartially?

It’s well-known among readers that after a love affair with one book, it’s quite challenging to derive satisfaction from a new book. Rebound books are needed. The last book I read made me indelibly happy. Perhaps I needed a little time before picking up my next book. Likewise, did I compare this book too closely to the aforementioned Netflix show? Did my feelings about The Clasp suffer from my comparison to a show with a slightly similar premise? I don’t know.

I can offer only this – in all likelihood my enjoyment of this book was partially inhibited by external factors. However, I stand by my assessment that immature, discontent, adult characters halfheartedly “finding themselves” is a tiresome recurrence in literature. Crosley is a skilled writer. Personally, I connected more with her narrative tone than I did with the story itself.

Have you read The Clasp? I am very curious to know if you connected with the story. Please do leave a comment.