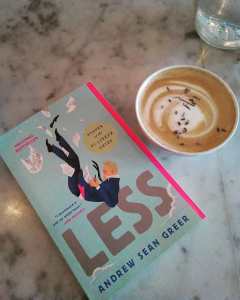 Last Friday, knowing we were due for big snow in the afternoon, I headed over to one of my favorite Kirkland eateries, DERUmarket. It’s a sweet little spot with a lovely interior, absolutely delicious baked goods, pizzas, and other tasty side dishes. I ordered an apple bread, a mocha, and grabbed a seat at the counter overlooking the espresso machine.

I always feel a bit silly taking pictures in public for the blog. I imagine it looks pretty pretentious, at the very least, semi-ridiculous – phone in hand, bending at contorted angles over a book cover and some coffee. Though, it’s probably a common scene; so many of us endlessly documenting what we’re doing on our social media feeds. In any case, the beautiful barista at DERUmarket noticed me taking pictures of a couple of different books, one of them Less. She sweetly mentioned their lavender latte would look quite pretty in the shot, and generously made one for me. It was really touching. Her latte was gorgeous. It made my picture picture, and made my morning.

Before you tire of my periphrastic style, I should probably get around to the real topic of this post – Less.

Arthur Less has recently split with his partner, Freddy. Freddy is due to get married to another man, and to avoid the wedding and his feelings, Arthur embarks on a little globetrotting. The book follows Arthur as he travels through Mexico, Italy, Germany, France, Morocco, India, and Japan. As he moves about the globe Arthur’s past, and his future, are revealed.

I was not fully immersed in this book until nearly the very end. Though it is quite well-written, I had trouble connecting with Arthur. His character is a bit detached and almost frustratingly nonchalant. It seemed to me that he had more than one great love in his life, which he treated rather carelessly. Why he let Freddy slip away was baffling. The story was interesting though; even, quaintly amusing. So I kept reading despite my uncertainty about Arthur’s quality of character.

By the end of the story I was beguiled by the narrative voice to such a degree as to overcome my misgivings about Arthur. One sentence in particular tickled me: But what I am trying to tell you (and I only have a moment), what I have been trying to tell you this whole time, is that from where I sit, the story of Arthur Less is not so bad. Such lovely construction of prose. Truly, the narrator is delightful from page one to the last. I don’t want to give away the ending. I will simply say that by the final pages, I was utterly cheered.

This book would be a fairly commiserative travel companion for anyone visiting another country. Arthur’s slightly bumbling tourism is entertaining and true-to-life. It’s also a great read for Valentine’s Day. If you’re in the mood for a love story, and want to avoid anything trite or formulaic, try Less.