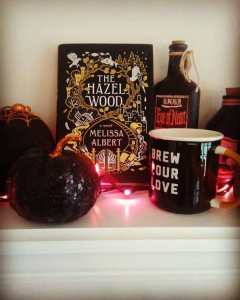 I don’t enjoy horror stories all that much, but I do like stories that are dark, spooky, and twisted. Fairy tales often exude those qualities. The cover of The Hazel Wood definitely oozes a foreboding vibe. As such, it seemed like a perfect October read.

Alice and her mom jump from town to town trying to outrun the bad luck that seems to follow them everywhere. When a letter reaches the pair stating that Alice’s grandmother has died, Alice’s mom decides it’s time for them to settle down once and for all in New York. Then, Alice’s mom is abducted. It seems that the key to finding her mom has something to do with a rare volume of fairy tales her grandmother wrote, and her grandmother’s mysterious estate The Hazel Wood.

The hardcover edition of this book is richly detailed, with a beautiful cover illustration and lovely floral endpapers. Oddly, the tiny illustrations at the start of each chapter don’t at all match the tone set by the cover art. The chapter illustrations look sophomoric, almost cartoonish, in contrast with the sophistication of the cover and endpapers. It may seem like a small detail to note, but the incongruous design aesthetic made the book feel instantly off balance.

The story faired no better. The book is by no means badly written. In my opinion though, it was a bit of a dud. It was as though the basic structure for a good story was in place, but the finishing details were sloppy. In order to provide a good supporting example, I will need to spoil some aspects of the ending.

***READ NO FURTHER if you wish to avoid spoilers.***

When Alice’s mom disappears, she enlists the help of her classmate, Ellery Finch. Ellery is a wealthy kid, with a cult-following knowledge of Alice’s grandmother that exceeds Alice’s own knowledge. Ellery supplies Alice with valuable information, and the funds, necessary to find her grandmother’s estate. Furthermore, there is a romantic tension underlying Ellery and Alice’s interactions. There is a feeling, initially, that their relationship is building to something.

However, their interactions are abruptly interrupted. Ellery is violently captured and Alice continues her journey for some time without him. She goes through a series of fairy-tale style quests, that are short, and rather pointless. She eventually solves the mystery, is rescued, and reunited with Ellery. As soon as they are reunited though, they somewhat casually decide to part ways forever.

It’s hard to explain, but it felt like the author sort of meandered through the final third of the book without a great deal of thought to the first two thirds. What was the point of a budding romantic tension between Ellery and Alice just to have them casually part ways at the end of the story? Was his character even necessary? Why bring him along for only half of the quest? For that matter, why bring him back just to peace out again at the end? Perhaps the author was going for a feminist, girl-power, ending – Alice doesn’t need a boy to resolve her story. But then, why introduce a romantic element at all? The narrative concludes; loose ends are wrapped up. However, much of it felt unnecessary.

Now I am also meandering, semi-pointless, trying to describe my frustration with the book. So I guess the story is much like this review. There is content, but it’s not entirely compelling.