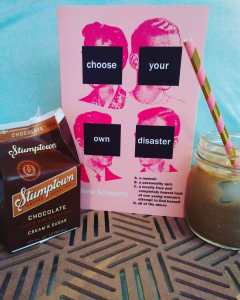 I’m a sucker for a choose-your-own-adventure tale. The concept – a story that changes based on the reader’s answers to multiple choice questions – has delighted me since childhood.  Thus, you can imagine my childlike glee upon seeing pristine stacks of Dana Schwartz’s book at my favorite local bookshop. A choose-your-own story for grown-ups? Consider my weekend booked.

The framework is organized much as you might think – multiple choice questions invite the reader to skip ahead to specific pages throughout the book, based on their personal preferences. It’s a playful format, with the reader in the uniquely active role of progressing the plot.

The book kicks off with a funny-ish quiz about the careers of rom-com protagonists. The reader is presented with a series of questions which lead to two different options of what kind of rom-com career they would end up in. Given either option, the reader progresses down a path that sounds quite hypothetical and fictional. So far, it’s straight personality quiz; a book loosely based upon the reader’s choices, with meaningless quiz results.

However, at the end of these two scenarios, the book takes an abrupt turn into the territory of memoir. Or, at least I think this is where the book becomes memoir. Schwartz dives into a story about an Intro to Fiction Writing class, featuring a handsome and aloof professor, and a student dead-set on impressing him. To all appearances, this is the first part of the book which reads as autobiographical. However, just like the opening quiz, it is written in the second-person. So, there is a quiz about “You” (aka, the reader), followed by a plot line seemingly about the author yet still written from the “You” perspective.

This is a bit like if I published a quiz about what type of blogger YOU would be (food, book, style, etc.), and then followed that quiz with a story about YOUR real-life blog Coffee Then Books. Clearly, I write this blog, not you. So it might be slightly disorienting to read something from me, about me, written as though it’s about you.

Writing the whole book in second-person narrative serves the purpose of a consistent narrative voice. In this case, though, it’s rather confusing because that second-person narrative is applied in two different ways, to two different voices. Furthermore, it’s unclear which parts of either voice are true. Since the cover of the book states that the story is “mostly true and completely honest”, it’s hard to identify which parts of the book are real, and which parts silly prattle. I found myself constantly wondering what was memoir and what was included solely for entertainment purposes.

Maybe that dissonance between memoir and fiction was intended as the creative genius of this book. There is something intellectually piquing about a memoir that plays with reality. Personally, though, I found it difficult to connect with the book. It was as if the author was holding me, the reader, at constant arm’s length – telling me deeply personal stories, but refusing to acknowledge them as her own.

Which brings me to the next point of contention. Though huge parts of this book are written in a humorous tone, and the very framework is playful, much of the content is quite serious. For example, not even halfway through the book it is revealed that “You” (in this case, presumably, the author) have developed a serious eating disorder. Reading about such a debilitating issue through the guise of a second-person, playful narrative, made for a weird juxtaposition.

Also, because I was skipping entire sections of the book (based on my answers to the various quizzes sprinkled throughout), I constantly felt as though I was losing the plot. Indeed, when I skimmed back through some of the parts I’d been instructed to skip, I found some rather profound and important sections. Such as this revelation:

“There’s no recovery. Of course there isn’t. This isn’t a chipper first-person sob story as told to a writer for a women’s magazine under the guise of female empowerment… Here is what recovery means: You have landed somewhere in the middle. You don’t throw up anymore. You allow yourself to eat most everything you want, even if you hate yourself afterward… The best thing you can say about recovery is you think about calories less often… The best thing about this recovery is that sometimes you allow yourself to forget you have a body at all. That is the best you’ll get”.

My quiz answers took me on a path that skipped that section altogether. A path that touched on therapy and medication challenges, but then sort of petered off the topic and onto new topics. Which caused me to wonder…

Would this book be more interesting and easier to follow, if the reader ignored the post-quiz instructions to skip ahead, and instead read page by chronological page? I suspect it might be interesting to simply read all scenarios in order, given that so much of the book is memoir, and each scenario reveals different memories or stories. Perhaps all the scenarios together would create a more cohesive whole; something akin to a complete plot.

I only skimmed through some of the sections I missed, so I don’t know if reading it chronologically would improve the book. I suspect it might, but I don’t have the energy to read it again cover to cover. Let me know if YOU do.

The original choose-your-own-adventure children’s books are not especially deep. They are books that take kids on daring quests, through a series of multiple choice questions, like: Do you A) fight the dragon or B) tip-toe around its sleeping body? Depending on the path the reader chooses, disaster may ensue, but the disaster is not personal, it’s just part of the plot. Choose Your Own Disaster takes that framework, and attempts to adapt it to the genre of memoir. I don’t think the combination worked particularly well. Disaster might lie around the bend of any chosen path, but in this case, it does feel personal. Personal, and painful, disguised as something silly and humorous.

2 thoughts on “Review| Choose Your Own Disaster by Dana Schwartz”