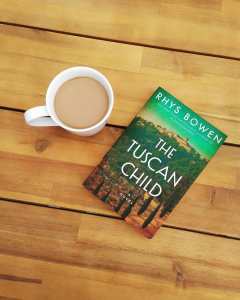 Joanna Langley returns to her childhood home, after her father’s death, to sort through what little remains of her inheritance. Having never been close to her father, who always seemed cold and removed, she is mystified to find a love letter written to an Italian woman, named Sofia, during the time of World War II. Wishing to uncover the secrets of her father’s past, and escape some personal troubles of her own, Joanna follows the address on the letter to a tiny town in Italy. Once there, she becomes entangled not only in the mystery of her father’s time in Italy, but also in the homicide investigation of a town local whom she met on one occasion.

The Tuscan Child jumps back and forth in time so that as the main plot of the story unfolds the story of the past is also revealed incrementally. It’s two stories for the price of one. The World War II plot line is essentially a straight war-time love story. Whereas the main plot line is a bit romance, with a dash of murder mystery thrown in for good measure.

The book is certainly interesting. I read it very quickly, curious to know what would happen to the characters, and how it would all tie together in the end. My only criticism, is that they murder mystery aspect of the story was underdeveloped. It was very easy to predict the murderer. What I found most frustrating though, is that the clues leading to the eventual murderer would have been perfect as red herrings. There was another character, whom I personally think would have made for a less obvious, yet equally plausible, murderer.

However, every story need not thrill with plot twists and character complexity. Nice, easy reading often compliments these hot summer days when heat inhibits concentration. Fans of war-time stories and cozy mysteries will likely enjoy this one.